The History of Piping

The Romans may have introduced the pipes to the British Isles during their occupation, but over the centuries, more than any other group, the Scots have adapted and adopted the pipes as an enduring symbol of Scottish Nationalism. The Bagpipe along with the tartan and the kilt were such powerful symbols of Scottish nationalism that they were banned by the English occupation.

The English feared the stirring effect of the pipes on Scottish emotions. Piper James Reid of Prince Charlie's army was executed at York on November 15, 1746 as a rebel. At his trial it was argued in his defense that he had "not carried arms," however, Lord Chief Baron observed that, "a Highland Regiment never marched without a piper... therefore, his bagpipe, in the eyes of the law was an instrument of war."

The Joy of Sacks 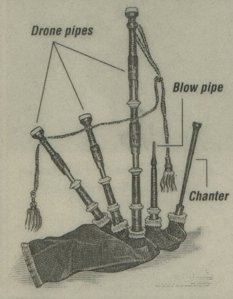 It is said that the great masters of the bagpipes can make the pipes convey nearly every human emotion, as though the pipes were speaking. For centuries, it was a commonly held belief that the pipes could talk. Stemming perhaps from the piper's duty to compose music to commemorate every important occasion. From centuries of compositions, we have music handed down to us ranging from the mournful to the exultant.

The Nature of the Beast

The Great Highland pipes consist of three drones (one bass and two tenor); a blowpipe with a valve to prevent the air from coming back out of the bag while the piper is taking a breath; a chanter with eight finger holes (nine notes), which is conical shaped inside; and a bag. Each drone has a single reed, a primitive older style, like a clarinet, and the chanter has a double reed, very 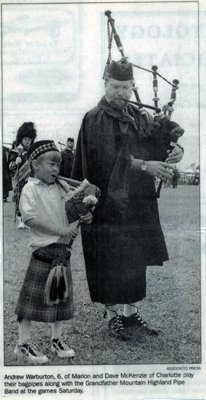 similar to that of an oboe. The piper plays by blowing in the blowpipe, inflating the bag enough to sound the three drones, then placing the bag under his arm and maintaining enough pressure to sound the chanter, where the melody is played. Each drone is tuned to "A" on the chanter scale.

Dave believes in passing on the skills of a piper to the next generation.

Pipers are judged on the following elements. Time, including tempo and breaks between tunes, the measure of sounds with regard to their duration and the speed of the rhythm. When more than one tune is being performed, a smooth transition is expected. The tuning and tone of the chanter and drones. The technical execution of the various movements and grace notes. And the expression or quality that appeals to the listener or conveys the sentiments of the composer.

Dave is a three time recipient of the MacCrimmon Quaich Award for Excellence in  Piobaireachd.

In addition, he has won with an actual MacCrimmon tune each time: The 1st time in 1998 with “A Flame of Wrath for Squinting Patrick” and two subsequent times in 2001 and 2002 with “MacCrimmon’s Sweetheart.”